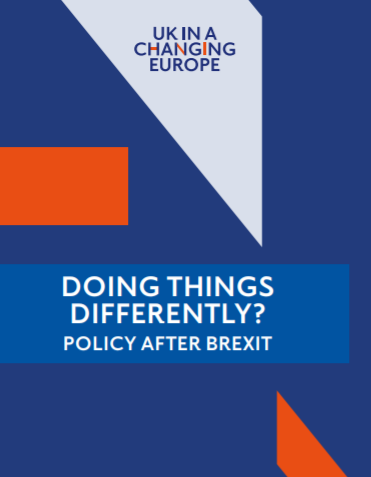 The UK in a Changing Europe (UKICE) has published a new report: ‘Doing things differently? Policy after Brexit‘. The report provides an update on last year’s ‘UK regulation after Brexit‘, as well as additional analysis.

‘Doing things differently? Policy after Brexit’ brings together a number experts in their respective fields to investigate how policy and policymaking have changed in a range of sectors. UKICE asked them to consider how changes so far compare to what was promised before Brexit, and to analyse what changes lie ahead and what their impact might be.

I contributed a section on public procurement. For more details and broader developments in UK procurement regulation, you can also see my recent country report for EPPPL.

What changes were promised after Brexit?

Procurement has long been heavily influenced by international and regional agreements, which constrain domestic choices to facilitate cross-border tendering for public contracts. Before Brexit, the UK was directly bound by the procurement rules of the European Union (EU), and indirectly by those of the World Trade Organisation’s Government Procurement Agreement (GPA), to which EU rules are aligned. As a result, UK regulatory autonomy was limited to the spaces left by general EU rules requiring domestic transposition. The UK decided not to exercise that limited discretion and consistently took a copy-out approach to the transposition of EU rules, so pre-Brexit UK procurement regulation was virtually identical to the EU’s.

During the Brexit process, public procurement was ear-marked for reform. Boris Johnson promised a ‘bonfire of procurement red tape to give small firms a bigger slice of Government contracts’ and his Government proposed to significantly rewrite the procurement rulebook, and to adopt an ambitious ‘Buy British’ policy to reserve some public contracts to British firms.

What has changed so far?

Despite those promises, the UK Government has made big efforts to replicate international and regional procurement agreements post-Brexit, which means it will continue to be hard to introduce an effective ‘Buy British’ policy. The UK gained GPA membership in its own right on 1 January 2021. This now directly constrains domestic choices on procurement regulation. The EU-UK Trade and Cooperation Agreement (TCA) also includes a chapter on public procurement that leaves mutual market access commitments virtually unchanged.

The UK Government was slow to understand (or at least clearly communicate) the implications of this continuity in the trade-related aspects of procurement regulation. On 15 December 2020, the Cabinet Office issued a Procurement Policy Note (PPN) on ‘Reserving below threshold procurements’ that formulated the new ‘Buy British’ policy in terms of reserving contracts by supplier location (either UK-wide, or by county) and/or reserving them for small and medium sized enterprises (SMEs) or voluntary, community and social enterprises (VCSEs). Aggressive implementation could have contravened international agreements to which the UK had signed up. This led to the publication on 19 February 2021 of a new PPN on ‘The WTO GPA and the UK-EU TCA,’ stressing that the pre-Brexit limits on a ‘Buy British’ policy remain in place and virtually unchanged post-Brexit.

On 15 December 2020, the UK Government published the green paper ‘Transforming Public Procurement’ to consult on planned legislative changes to the procurement rulebook. The original timeline envisaged the introduction of a Procurement Bill in Parliament after summer 2021. However, the volume of responses to the public consultation (over 600) and the complex issues they raised, as well as the intrinsic difficulty in seeking to significantly change procurement law in a manner that is compliant with international obligations led the Cabinet Office to adjust the timeline. The 6 December 2021 Government response to the public consultation clarified that the new regime will not come into force until 2023 at the earliest.

So far, then, the Brexit-related changes have been modest. There have been some policy developments, such as the adoption of a National Procurement Policy Statement seeking to embed government goals such as growth and jobs and climate change in procurement decision-making; a push for a fresh approach to assessing social value in the award of government contracts; new requirements for firms applying for major contracts to have Carbon Reduction plans; and to also require those firms to have systems in place that ensure prompt, fair and effective payments to their supply chains. None of these will reduce procurement red tape and most, if not all, would have been possible pre-Brexit.

What are the possibilities for the future?

Given the commitments in the GPA and TCA, there is virtually no scope for a Buy British policy. The UK could be more aggressive in the exclusion of tenderers from non-GPA jurisdictions such as China, India or Brazil (something the EU is increasingly doing) as a practical way of seeking to boost contract awards to UK companies.

By contrast, the process of reform of the UK’s procurement rulebook is likely to result in a new set of streamlined regulations, as well as a voluminous body of guidance. Despite the Government’s prioritisation of simplification as a primary goal of legislative reform, the extent to which procurement can be significantly deregulated is unclear, as a result both of international commitments and, more importantly, the need to create a legislative framework fit for purpose that does not overwhelm the public sector in its complexity.

There is an opportunity for the Procurement Bill to make some progress on the modernisation and digitalisation of procurement systems, which has been slow in the UK despite it being a shared strategic goal with the EU. It is likely that the new rules will bring a clearer focus on open procurement data, which could enable a change of approach to the practice and management of procurement and offer some benefits from a red tape perspective. However, the green paper was criticised, among other things, for a lack of ambition in the automation of public procurement, so the extent to which tech will be a pillar of procurement ‘transformation’ in the UK remains unclear.

Overall, not much has changed and, rhetoric apart, there is limited scope for further change.